November and December sales were dominated by the holidays along with the consumers’ response to rapidly rising new COVID-19 cases across many states. Some states and cities enacted renewed shelter-in-place mandates which impacted grocery retailing in many ways.

In December, consumers’ trip frequency fell below last year’s levels, much like it had in early April, while e-commerce transactions made a return to spring levels. Holiday celebrations were vastly different for Thanksgiving and the December holidays alike. There was less travel, gatherings were much smaller and many consumers shopped much earlier or online to avoid holiday crowds. But unlike the spring when similar conditions drove grocery sales double digits above year ago levels, December grocery spending was the most subdued it has been since the onset of the pandemic. 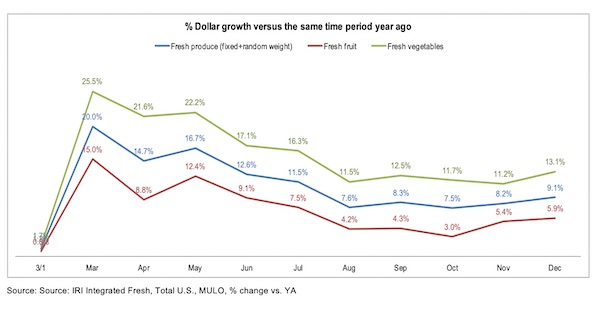 Looking at total fruit and vegetable dollars in fresh, shelf stable and frozen shows a majority share for fresh, at 76%. While this is below average against the entire 2019 calendar year (84%), this share moves up and down throughout the year. In November 2019, the fresh share of total dollars was 76.6% versus 76.1% in 2020.

In September, volume sales briefly exceeded dollar sales on aggressive Labor Day pricing. But in the next three months, including December, dollar gains once more outpaced volume driven by vegetables. 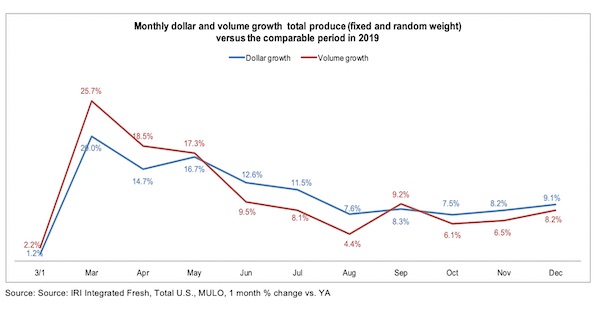 “Retail fruit sales were perfectly in balance,” said Joe Watson, VP of Membership and Engagement for the Produce Marketing Association. “Both volume and dollars were up 5.9% in December versus year ago levels. Vegetables had an increase of 13.1% in dollars and 10.4% in volume. That marks the first time since September that vegetable volume growth jumped back into double digits.”

“The December Top 10 in absolute dollar gains reflects some familiar faces, led by berries, tomatoes and lettuce,” said Watson. “Oranges re-appeared into the top 10 and mushrooms and cucumbers are holding on strong as smaller, but mighty categories.”